Phil Richards and I decided that Commonwealth Ridge would make a nice first summit of 2016 – and we were right. We started in beautiful predawn light from the Smuts Pass parking area along the Spray Lakes Road in cold temperatures of around -23 degrees. The cold was a bit of a bummer as we were expecting warmer temps – but we warmed up soon enough as we snowshoed towards the ridge on a highway of ski and snowshoe tracks. Initially we were following So Nakagawa’s GPS track, but soon we started questioning this decision and turned back to find a more direct trail up the ridge. Thankfully we found another highway track going in the right direction which I’m sure saved us hours of deep sugar-snow trail breaking which is as much fun as it sounds – i.e. not much!

Originally I was planning to attempt skiing Little Galatea, an outlier of the much larger Mount Galatea. After Matt Clay posted that he and Matt Hobbs had recently spent a considerable amount of energy breaking trail through sugar-snow to the upper ridge, I couldn’t resist taking advantage of this on my ‘shoes, and I got to spend another day in the hills with my family out of the deal. Now that I’ve ‘shoed it, I’m glad I didn’t go for it on skis, via the alternate route. The only way to ski LG is via the massive avalanche gully that Nugara recommends ascending and which I think should be avoided by all but very confident and avy-aware skiers / ‘shoers in prime conditions.

After snowshoeing Coyote Hills the day before, Raf and I decided that Junction Hill looked too tempting to leave it alone for long. We both returned on Sunday, January 19 to see what it’s summit would offer for views. Ironically we took different routes and drove separately – never even running into each other en route! This was not the intention. When Raf told me that Kev and him were going to attempt Junction Hill on Sunday, I assumed he meant Kev Barton. I agreed to meet at the trailhead since it’s easier for me to bomb down hwy 2 and go past High River and Longview from that direction than go through Calgary. When Kev Papke called me at 08:30 as I was driving past High River already, I realized that I should have asked which Kev. Oh well. (Kev Papke and I can usually carpool together.)

On Saturday, January 18 2014 I was joined by a gaggle of friends for a snowshoe trip under an extremely warm, winter sun. Due to high avalanche risks all over the Rockies (all the way to the coast actually), we decided on a relatively low angle and hopefully snow free ascent. We scored on one of our objectives at least. Due to a mix-up with some of Marko’s friends, Raf, Wietse, Andrea and I ended up breaking trail to the summit with Marko, Amelie and company following. We decided that this was our anniversary present for Marko and Amelie since they just got engaged.

You know it’s not a very interesting trip when it takes me a few weeks to write it and the main photo is from the drive to the trailhead… 🙂 Honestly, there isn’t much to recommend the snowshoe trip up the North Ridge of Mount Buller, other than a decent view from the top and some good sweating (and swearing?!) on the way up. I drove up the Spray Lakes road under a gorgeous sunrise but from there the day went downhill. I couldn’t find any old tracks up the north ridge and ended up in knee deep, unconsolidated crap for two hours before realizing there was an old track about 100 meters to my right!

After skiing up Healy Pass Peak the day before, I decided to take the family on a snowshoeing trip on Sunday, December 15 in preparation for our trek to the Elk Lakes ACC hut in one week. Bob Spirko indicates that the elevation gain is only around 300 meters on Gypsum Ridge so I figured this was a good candidate to bag a peak and get the family out. I also liked the fact that we’d be in the trees because the day was shaping up to be fairly cloudy and windy – but warm. 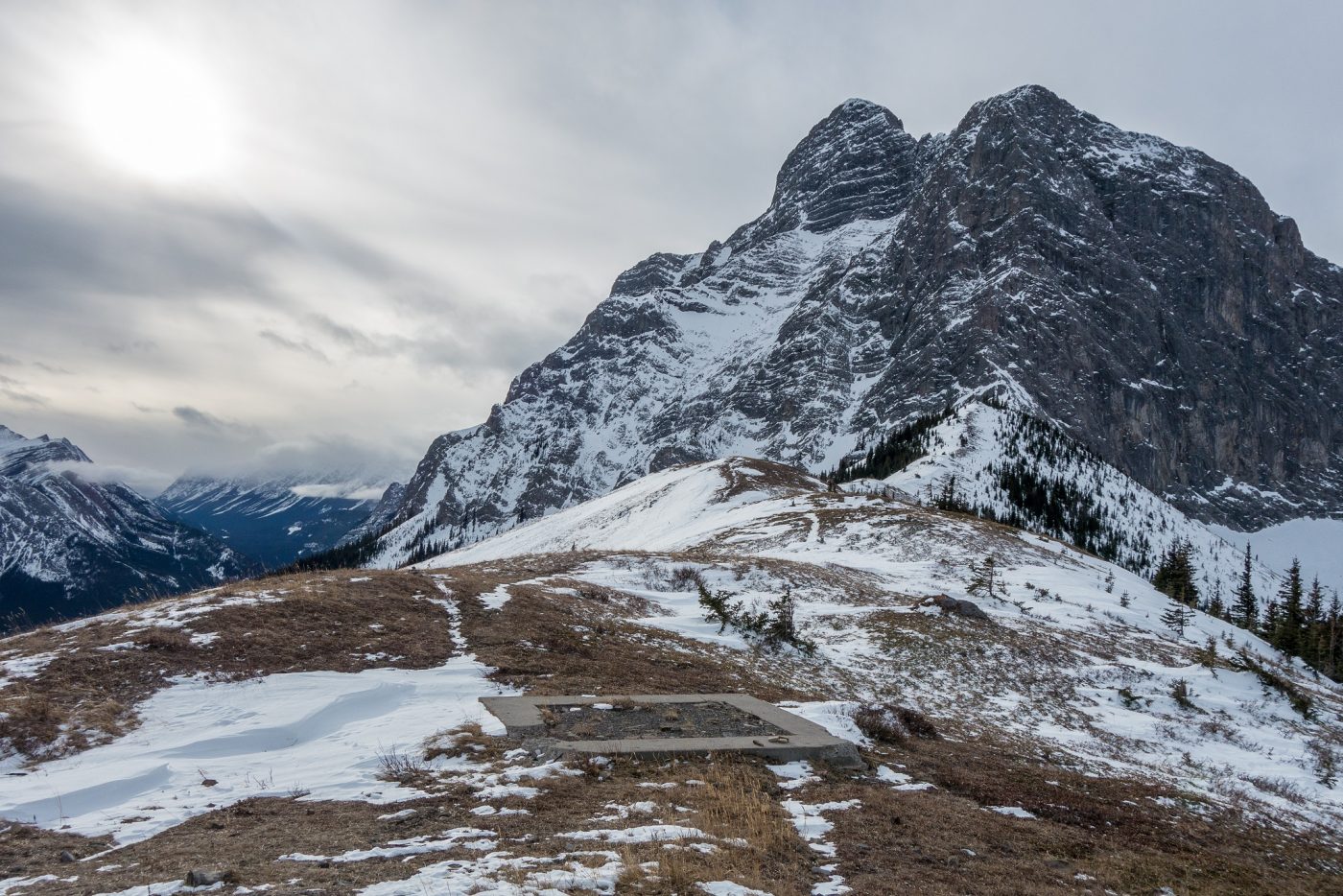 With an impending snow storm and cold weather ahead, I decided to take advantage of a warm start to December with a snowshoe up to the Mount Kidd fire lookout and possibly a high point further up the ridge. I decided to call that high point, Mount Kidd Junior in the taste of naming every bump in the Rockies a “junior” of some other peak. You can laugh all you want, but I earned this summit.

On Sunday, April 21 2013 I joined Steven, Ben and Eric on a two peak day in which we snow shoed Big Bend Peak (BBP) and Mount Saskatchewan Junior (MSJ). Our plans for this weekend were originally to have an easy day out on Sunday with an ascent of BBP followed by some relaxation at the Rampart Creek Hostel and then a huge one day ascent of Mount Wilson on Monday. The weather forecast for Sunday was a mix of sun and cloud with the weather on Monday looking perfect for an ascent of Wilson – notorious for white out conditions on the summit with any cloud cover.

After reading that Jose and Fabrice had kindly set down a ‘shoe track on Volcano Peak in late March 2013, I decided that Good Friday would be the perfect opportunity to do a solo trip on a beautiful spring day on their hard-won trail to finally finish off the ‘grand traverse’. I was right! Volcano Peak can be done as part of the “grand traverse” from Wasootch all the way to Volcano, passing over GR338442, Kananaskis Peak. 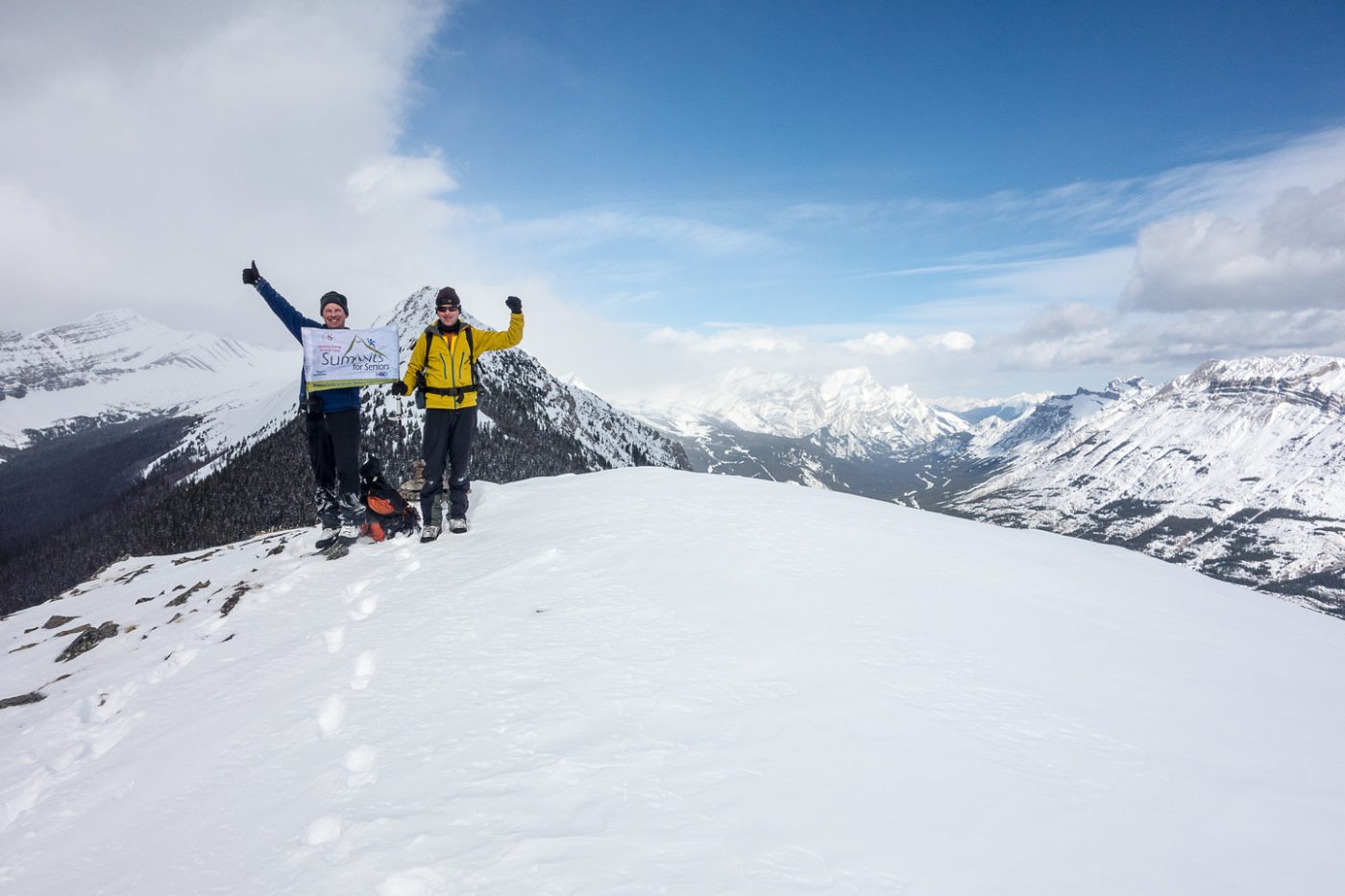 In my rant on the Mount Fortune trip I made it pretty clear what I think of invented peak names. So why did I climb one and put it on my summit list the very next day?! Because if other’s list and count it as a separate peak I guess I have to too. And because “Little Lawson”, just like “Red Ridge” and other less prominent peaks are actually listed in published guidebooks and have hiking trails to the summits above – basically they’re “official”, “unofficial” summits. 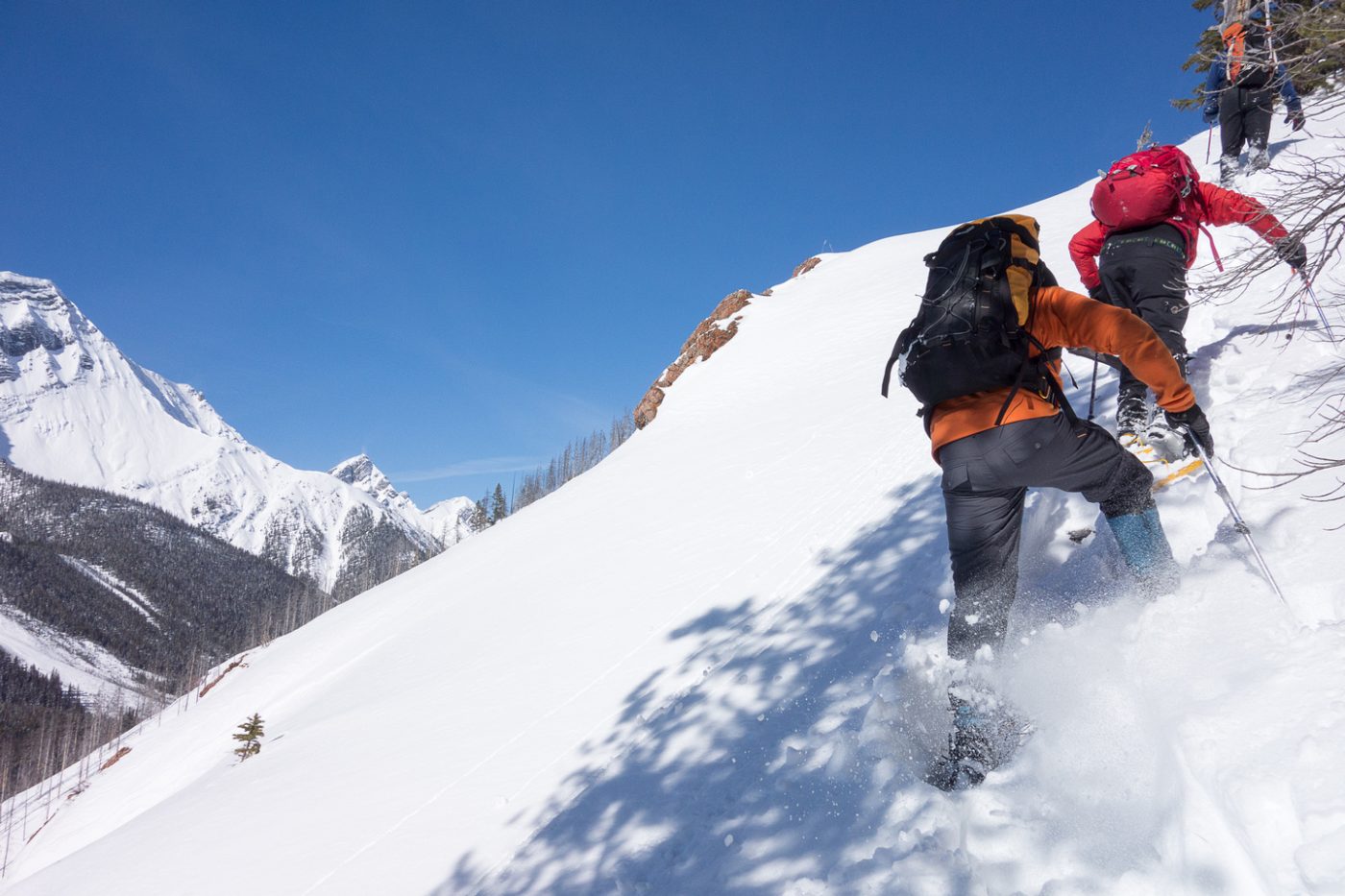 Mount Fortune is one of those peaks that’s best saved for a day when you really don’t have many other choices. On Saturday, March 2 2013 we made our first attempt at this little peak. Due to rain / snow the night before, the snow pack was completely bottomless and saturated with water. The clouds were low and getting lower and our mood as we crossed the lake was following that same trajectory – lower and lower! 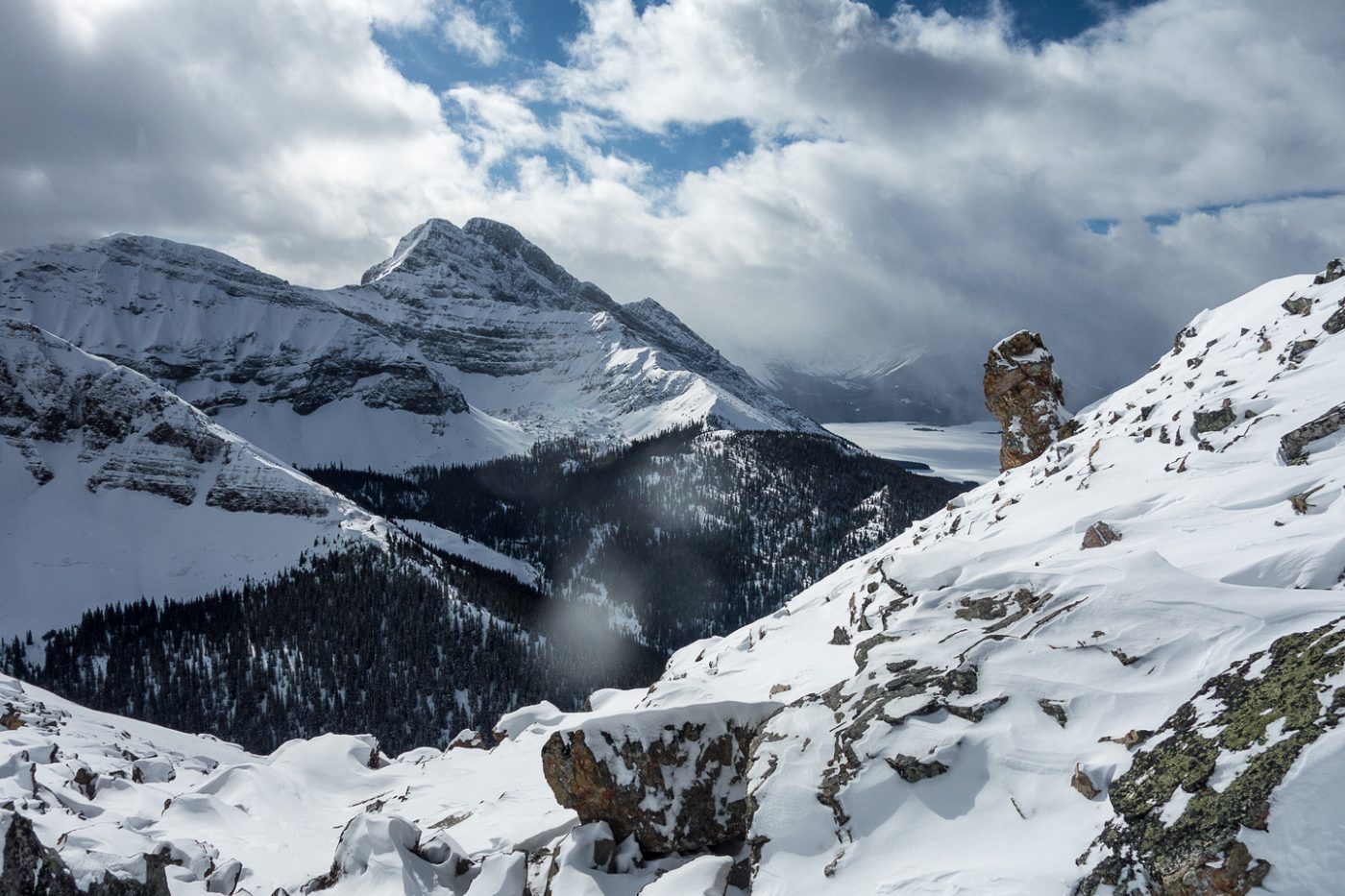 Kev Papke was getting close to his year-long, 50 peak fundraising effort and was in need of 4 peaks in 4 weekends in order to fill the 50 peak ‘order’. The weekend of February 23/24 wasn’t looking great for anything too aggressive and since Kev could only go on the 23rd our options became even more limited. I don’t do ski mountaineering if avalanche likelihood is either ‘considerable’ or ‘high’, so any ski trips were pretty much out of favor.