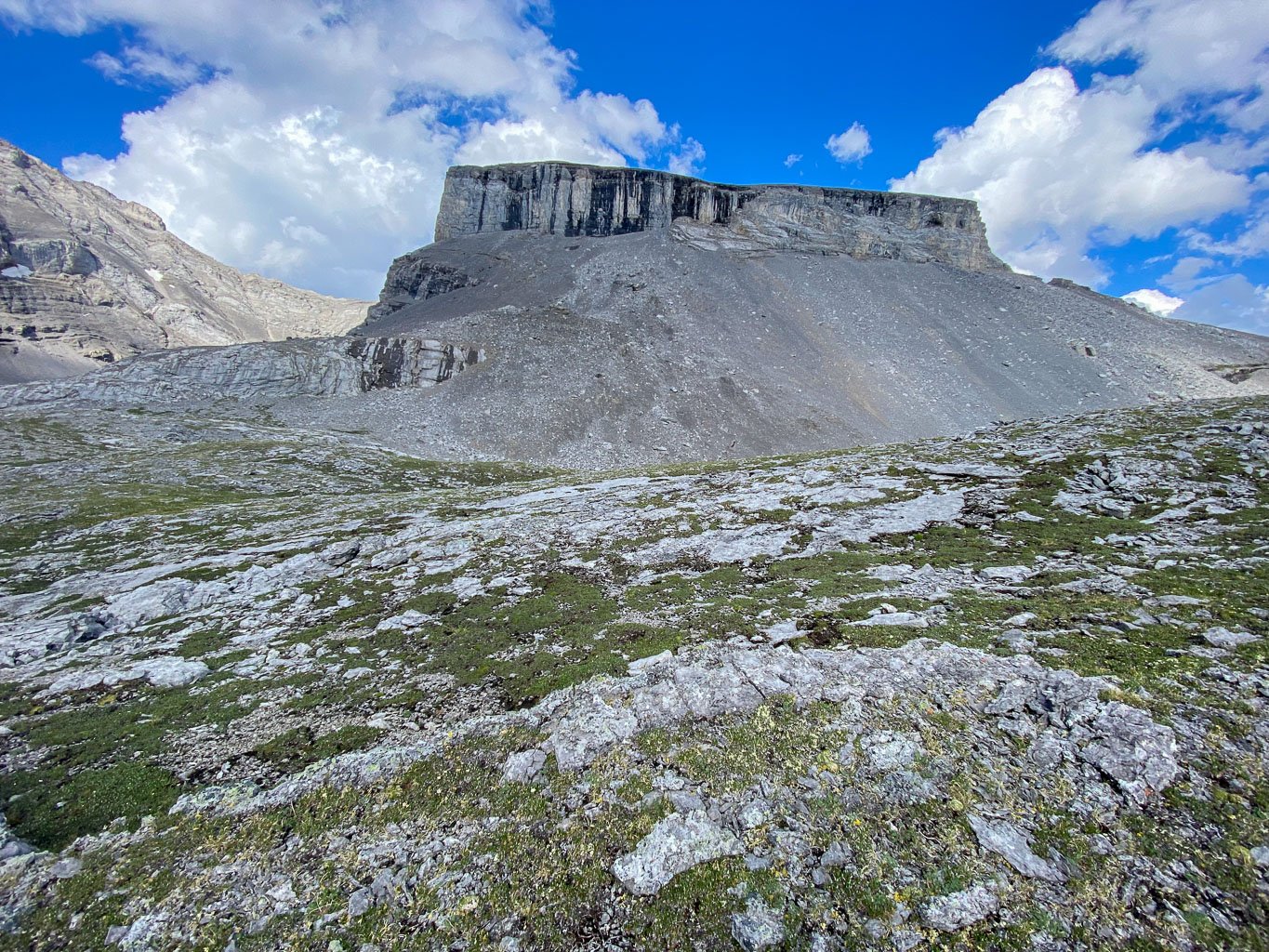 Apparition Mountain has always been a “tag on” peak for me, sitting next to its higher and more interesting neighbor to the NW – Revenant Mountain. This doesn’t mean I didn’t intent to scramble it or that I wasn’t interested in it, it just means that as far as peaks go it was never at the top of my list as a worthwhile destination on its own. After approaching the lovely Spectral Lakes and ascending Brocks Peak earlier in the day, followed by an afternoon ascent of Revenant Mountain,  I was feeling pretty tuckered out at my lovely little campsite at the SW tip of the lower Spectral Lake. I ate my supper slowly, staring up at the sweating western cliffs on Apparition above my camp and wondering what the route through the obvious scar on the face was like. You know how these things go with me don’t you? If you’re a regular reader you sure do!

I decided that since Revenant Mountain had gone so smoothly and was the more difficult and higher of the two peaks, I might as well try for an evening ascent of Apparition using beta from Sara McLean and following my nose up the west and upper SW ridge. The weather was holding perfectly as I slowly trudged up the large scree and boulder slope under the imposing west cliffs above the lake, hoping that nothing would come off while I was underneath it! I was very happy to be wearing my helmet in this terrain, let me tell you. Within 30 minutes of the lake I was starting up the very cool staircase crack along the cliff. Caution was required to avoid huge toppling blocks that were barely stable enough to stick to the mountainside on their own, nevermind with a human pulling or pushing on them.

I was relieved to pop out of the crack through the cliffs and see nothing but easy scree slopes to the upper SW ridge above. I wandered up the scree, wondering at the beautiful day I was experiencing and how lucky I feel to be able to do this sort of thing. Not every human body is made for this stuff and even though I often hate on my shape I have to give a huge shout out to my muscles, joints and bones that allow me to do this in my mid-40’s after pounding on them already for ~25 years. I like to think that I train pretty hard to be able to do this stuff but even that is just more wear ‘n tear on everything. I can’t ever stop moving now because if I do I’m sure this ol’ engine will seize up permanently!

As the air around me cooled with the lateness of the day I approached the SW ridge where things all of a sudden got a bit more serious. I can’t call the scrambling “difficult” here but there is some exposure along the SW ridge just under the summit block. After enjoying a brief flirtation with air on either side of me I was surprised to see a much more serious obstruction just ahead. I remembered Rick and Sara mentioning an easy by-pass to this new nastiness and sure enough, poking around on scree slopes climber’s right (SE) of the ridge crest allowed for much easier and safer access to the summit. 1 hour, 15 minutes from the tent and I was standing on my third and final peak of the day.

Summit views were very respectable, even as an evening haze obscured some of the views to the west. The most interesting views for me were east, over the Ghost River valley towards more obscure and hard to reach peaks such as Oliver, Astral, Poltergeist and Costigan. Of course Revenant and Aylmer featured very prominently from here too. Being only the 4th signature since Rick Collier’s 1994 ascent was pretty neat – especially considering two of us ascended this peak in the past week!

As the summer sun slowly started to sink in the west I started to slowly descend the SW ridge to the west cliffs and their staircase escape crack. Water droplets caught the sun and cascaded off the cliffs above onto my helmet as I made the delicate descent of the weakness through the cliffs before descending to the upper Spectral Lake to check it out before returning to camp at the lower lake.

I enjoyed the ascent of Apparition Mountain very much. The early evening lighting, the sneaky route through the cliffs and the exposed ridge walk near the summit block all added up to more engagement than I expected when planning this scramble. At less than 2.5 hours round trip from a camp at Spectral Lakes it’s an obvious no-brainer for anyone brave enough to stay overnight in such a ghost themed area!