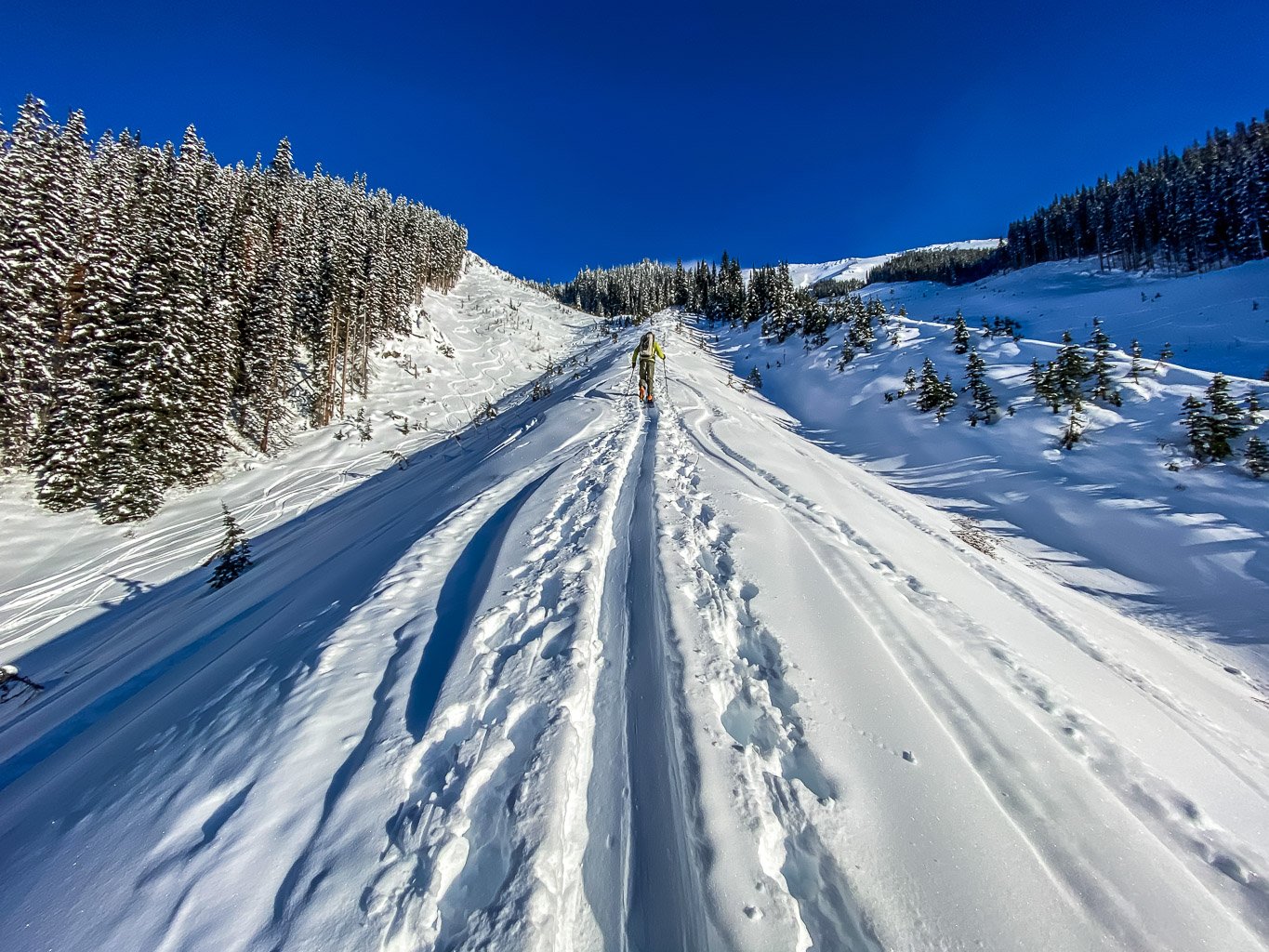 I was on my first lap descent of Prairie Mountain on a chilly Valentine’s Day when I ran into Patrick and Joanna on their ascent. We stopped and chatted for a few minutes and Joanna mentioned how great her ski season has been going. She was still pretty psyched from a ski ascent of Ochre Spring Peak the day before and that got my interest. Wietse and I had originally been planning a ski tour of the Pulpit Knobs for the following day which was a Family Day holiday but this sounded much better. I’d hiked Ochre Spring Peak in very early June 2018 with Phil Richards and remembered stunning views from the summit despite having some cloud cover. I also remembered some pretty severe avalanche slopes near the summit and was a bit wary of challenging those but she assured me the snowpack felt very stable. When I got home I did some poking around and quickly realized that more folks had followed Jo’s group’s skin track up the peak on Sunday and also reported good conditions. When I ran the idea past Wietse he was all in – apparently he hadn’t been up Ochre Spring yet giving him a new objective on top of a potential great ski tour. I was excited for the views but in the back of my head I was a little bit nervous about the steep route. My new skis are awesome but I have noticed some skin issues with them since I was being Dutch and trying to reuse skins from my skinnier skis. I had already noticed on several trips this winter that steep skin tracks are NOT my friend this year – I was about to find out just how unfriendly things could get…

Wietse picked me up at 06:00 and by 08:00 we were pulling into an empty parking lot along the Banff-Radium Hwy near the Paint Pots and Ochre Creek. We wanted to be the first group up the peak as I strongly suspected that this holiday would be a busy day out and about this objective. The temperature was a very chilly -26 degrees as we started skinning along any icy track towards the Vermilion River. The river was frozen over and we didn’t even use the bridge, skinning up the far bank and following a myriad of skin tracks up Ochre Creek. It took about 50 minutes to the massive slide path that I remembered from my earlier hike to this peak. There were a few skin track to choose from at this point – we choose one that started out on the east side of the slide path. Almost immediately I realized that I was in trouble with my “skinny skins” on the well traveled ascent track. Because the skins I was using weren’t stretched to the edges of my skis (even underfoot) and thanks to the icy track I simply couldn’t get enough grip to climb efficiently. On fresh snow I was fine but on the icy track I was toast. The rocker and length of my skis also didn’t help with the too-small skins. As the track got steeper and steeper my language got more and more colorful. Wietse was making it look frustratingly easy and was wondering what my issue was – and getting more than a little annoyed with the way I was disturbing his beautiful, peaceful morning ascent. 🙂 To make a long and frustrating story short – the rest of my ascent was very challenging to say the least. I normally love skinning uphill but not this particular day! Even putting ski crampons on didn’t help. I’m currently shopping for proper fitting skins for my skis and considering this experience a valuable lesson learned on the value of not always trying to save money by reusing things that shouldn’t be reused.

At first I was worried that the ski ascent route went straight up the huge avalanche gully that Phil and I used in 2018. Joanna mentioned something about taking a left-hand branch instead and I was relieved to see the skin track deviate out of the bottom of the main slide path and up a narrower one to the west – albeit still an obvious avy gully and plenty exposed to overhead hazards. My skin troubles only increased dramatically as the up track got even steeper and combined with many tight corners I was not having as much fun here as I normally would have. Wietse was merrily dancing up the slope ahead of me – trying to outdistance my grumbling. I wasn’t enjoying the ascent but looking around I was sure enjoying the gorgeous winter day we were having! As we continued to ascend our views improved and it was obvious that we’d timed this summit perfectly.

After ascending a cool spine / moraine feature that split the left and right hand slide paths the track got back to work, ascending the safest line steeply up to treeline. Our views kept improving although my mood didn’t. I think most folks would have turned back at some point in the struggle but I knew the views and the ski back down would make the suffering worth it and kept following the speedy Dutchman upwards. Finally just over 2.5 hours from the parking lot we crested a lip on the avalanche slope and were treated to views of the upper mountain above treeline.

We knew from Joanna and others that the upper 4 to 500 vertical meters would be the toughest as far as snow conditions went. This was to be expected since these slopes would be the most likely to be wind affected and they were. Ironically my ski crampons finally started helping on the rock hard snow and I found ascending this section easier than the previous 1000 vertical meters. Wietse finally started suffering a bit here too which made me a little happier than it probably should have. 😉 Our views across Ochre Creek and Helmet Creek to the Rockwall and the Goodsir Towers were incredible.

It took a bit longer than expected to reach the summit but after just over 4 hours from the parking lot we finally crested the final snow drift to the top. The wind was cool but we enjoyed the views immensely. It was very satisfying to stand there and experience a crystal clear view of so many impressive peaks in the Vermilion, Ottertail and Bow mountain ranges.

Finally it was time to enjoy the real prize of this objective – a 1400 meter ski descent! The skiing was slightly better than expected to treeline and slightly worse than expected from there simply due to the myriad other tracks already there to ruin a smoother run. We were expecting other tracks but even we were surprised to see at least a dozen other skiers ascending the slopes behind us as we swooped past.

Despite skin troubles on the ascent I enjoyed skiing Ochre Spring Peak more than the hike and would highly recommend it for a winter ascent.