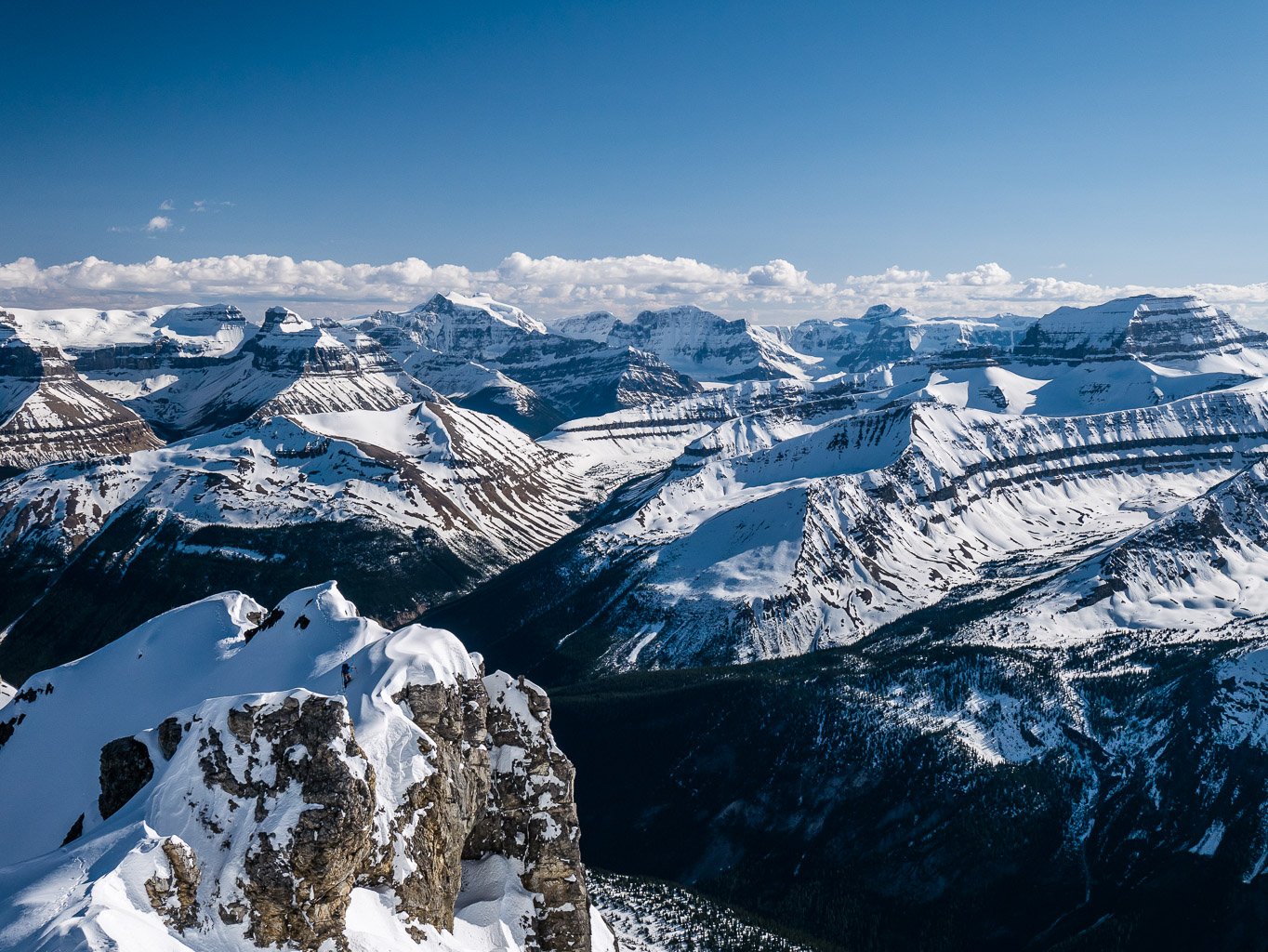 As another weekend approached, the familiar email chains started to fly once again. Weather reports and routes were scouted and by the time the dust had settled there were 2 options remaining on the table; Mount Joffre or Mount Cirrus. Joffre was higher on the list (being 600 feet higher) but the weather forecasts couldn’t quite agree on how much rain each area was going to get or when it was going to arrive and in what fashion (i.e. snow, t-storms or just a sprinkle). Given our dislike of crappy summit views, especially on peaks with tough approaches, we settled on Cirrus and finalized our plans.

I’ve been interested in Cirrus ever since seeing it from Mount Coleman back in 2009 (my first trip with Eric). Mount Amery (yet another adventure with Eric) was also a trip that was inspired while ascending Coleman. Since then I’ve had a few friends do Cirrus and they all seemed impressed enough that it was bumped up in my priorities. Last year I spotted it yet again from Mount Cline and was determined to make it happen in 2014. My intent was always to do it in summer or fall since I wanted Coleman Lake to be melted for its views, but it didn’t turn out that way. Reading Rick Collier’s report on Bivouac.com made me realize how lucky we were to get the views we did from the summit, so maybe it’s a better snow climb anyway! Snow certainly made it spicy on the upper ridge – but now I’m getting ahead of myself.

The group met at the small pull off across hwy 93 from the access drainage at 09:00. By 09:30 we were grunting up the steep gully. I know people have lugged their skis up here, but we had snowshoes strapped to our packs, which makes for a much more compact pack. We stayed climber’s left of the stream and avoided most of the difficult terrain before continuing high above the creek and across several avalanche slopes to the first tarn. We were surprised that the first lake was almost ice-free. The views back towards Amery and Saskatchewan were impressive too! Don’t underestimate this initial grunt to Coleman Lake – it’s over 500 meters height gain and is quite steep in places. You’ll also want a GPS track or some cairns for descent so that you don’t get suckered onto cliff bands which are scattered all over the place.

Once we arrived at Coleman Lake we stayed high on climber’s left, since it looked impossible to traverse right by the lake shore. Coleman lake was mostly frozen over, but signs of spring were everywhere near the alpine including about 6 varieties of flowers and even butterflies flitting around us occasionally. The smell of new growth was invigorating too! This would be a wonderful place for a summer hike / bivy, being only 1.5-2 hours from the hwy but feeling rather remote and not visited by many people due to the nature of its access.

After traversing the lake (and getting soaked feet thanks to no more waterproofing on my mountaineering boots) we descended a bit before taking a gully to the pass that leads into the White Goat Wilderness and out of Banff National Park. I should note here that there are two route possibilities from the slopes north of the lake, just before the pass. There is the option of going straight north through an obvious pass (Rick Collier did this route) which involves more glacier crossing, or the option we did which was descending to Huntington Creek to bivy and approach on climber’s right of the glacier rather than left.

After descending on surprisingly firm snow (it was quite warm and already noon), we found a perfect place to set up camp. Steven and I had conversed already by the cars that if we had time and good weather we should attempt the peak already on day 1 and this is exactly what we ended up doing. Considering we were done in camp by 15:00 already, there was no way we were going to sit around for 7 hours in good weather with the summit staring us in the face! We strapped on the ‘shoes and started up the moraines towards the rock fin that would guide us to the summit slopes.

The snow was very stable as we climbed past the fin on climber’s left. We may have strayed briefly onto the ice field, but it was fairly benign on the right hand side and we weren’t concerned about crevasses there. After about 1.5 hours we found ourselves staring up at a 30-35 degree slope leading to the upper ridge. We hummed and hawed a bit about how safe it was, but things were locked up very solid and the snowpack was extremely dense on this slope – probably due to several slides over the winter season combined with a good melt-freeze cycle. Here’s where the ‘shoes were awesome! If we were on foot we’d have been sinking to our knees or even waists on the approach. With ‘shoes we managed to go straight up the entire slope to the summit ridge without sliding or even having to switchback. I love skiing, but ‘shoes were the perfect tools for this objective at this time of the year.

The shadows were lengthening but the weather was perfect and we had stunning views in all directions as we attained the final ridge before the summit bump. Here we dumped our snowshoes and put on crampons and grabbed axes. The ridge was exhilarating and tricky in spots, combined with some steep scrambling and exposure it was thrilling to be at 10,000 feet on a beautiful spring evening on the last day of May! The final slog to the top went without incident and within about 3.5 hours of leaving our bivy we found ourselves staring at a sea of peaks in a nice cool breeze.

After snapping a million photos of familiar peaks in all directions it was time for descent. Going down the ridge required some delicate steps and careful down climbing but we all made it back to the ‘shoes without issue. The snowpack held up wonderfully all the way back to camp where we still had at least an hour of daylight before turning in for the night.

The next day we slept in ’til 06:00 and by 07:00 camp was packed up and we were hiking out under a lovely morning sky. The snow was nice a frozen (would have been front-pointing on Cirrus) and we took advantage of this as much as we could. The descent back to the cars down the manky approach gully was steep and hot but we made it without too many scars. What a great trip! The four of us always seem to have a good time when we head into the hills and this time was no different. I highly recommend Cirrus as a spring ascent on snowshoes if you’re comfortable on exposed snow ridges. Otherwise wait ’til summer and it’s basically a scramble.

Our round trip time, including an hour break in camp was 14.5 hours. Considering we had heavy overnight packs, I think a strong party could easily day trip Cirrus in around 14 hours round trip. Of course, you’ll have to get lucky with the weather and conditions, since you’ll be up high at mid to late afternoon. Avoiding storms can be tricky on a peak that’s so close to many icefields and across from the large Columbia and Saskatchewan glaciers.