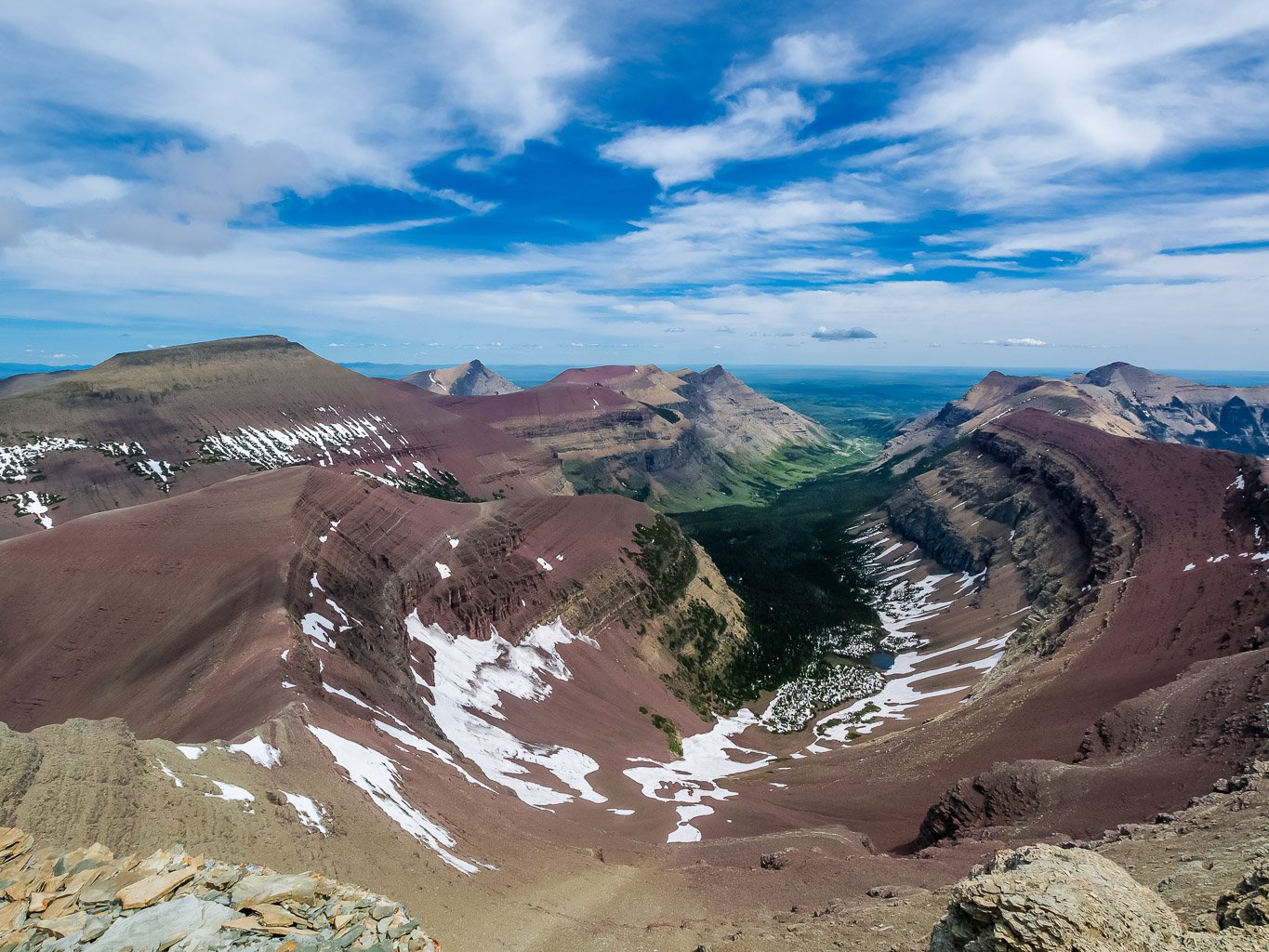 As part of a 3 day trip to Waterton Lakes National Park in the spring of 2009, Wietse, Keith, Anne-Marie and I completed a wonderful traverse of 3 peaks along a stunning ridge hike / scramble – Newman Peak, Spionkop Ridge (actually not in Waterton) and Avion Ridge.

Saturday June 20, 2009 started off with calm and sunny skies as we made our way up the Snowshoe Trail towards the Goat Lake turnoff. We should have brought the bikes for the first 4.6km on the Snowshoe Trail but we didn’t feel like packing them when leaving the day before and since Wietse would have had to rent one we just didn’t bother. Take my advice though – it’s worth it! Basically you’re walking 10km that you could be biking and the terrain is a fire road and very easily biked… We’re just idiots sometimes!

After reaching the turnoff to Goat Lake the terrain became very interesting and much steeper. There were cascading waterfalls, fresh flowers, cool mountain air and the sound of birds everywhere. It was very refreshing to be back in the mountains in spring. The trail to Goat Lake is one of the coolest I’ve been on in Waterton – although all of the main trails in Waterton are pretty great. I just love it when you look up at a wall of loose rock and don’t see any way though it but then follow a great trail the whole way along. The waterfalls below us and the great views across to other peaks and valleys kept us from noticing all the height we were gaining.

Eventually we came to Goat Lake and started encountering good patches of snow near the campground. “Good” means that the snow was supportive for the second day in a row and we easily walked on top of it without post holing too much. The upper valley above Goat Lake was still blanketed in a heavy white coat and we lost the trail several times while negotiating our way through the two head-walls. This was an issue only where there was recent avy debris since the bushwhacking was intense with no trail.

The head-walls were fun and easy scrambling and eventually we were standing at the Avion Ridge / Newman Peak col and for the second day in a row we had no wind – simply unheard of in Waterton. Unlike Akamina Ridge the previous day though, we also had a mostly sunny sky. The day was simply outstanding and we were enjoying ourselves immensely. Because we were a bit leery of the continued good weather (ok, we’re a bit pessimistic at times), we decided that Newman Peak would be our first objective since Spionkop Ridge was next and it was furthest from any sort of reasonable bailout route.

Wietse took off for Newman while Keith, Anne-Marie and I took some time for brunch and a drink. Anne-Marie ended up smoking past all of us to claim the summit first, followed by the rest of us. “Speedy-Marie” became her nickname for the rest of the trip! Newman was a bit strange since it’s actually quite a bit lower than a connected GR. Good thing I bought a map in the information center and had it along for reference or we would have spent a lot of energy bagging a GR and calling it something it isn’t!

After enjoying the summit views we started the traverse towards a distant looking Spionkop Ridge.

After summiting Newman Peak we headed off for Spionkop Ridge. In 2008, Wietse and I had scrambled up Loaf Mountain and were tempted at the time to make the traverse over to Spionkop. At the time we were too tired to bother (and it was very windy) so we were really hoping to summit this time.

The traverse from Newman to Spionkop went off without a hitch. The biggest ‘problem’ was that the views were so good that I kept stopping to take pictures! When I got home I had to delete a lot of duplicates. I didn’t realize it at the time, but the valley that provided the best views was the Yarrow Creek Valley which I’d also admire years later in 2012 on a solo trip up Mount Roche and Yarrow.

Once again the miracle continued and we managed to have a nice long lunch break on the summit of Spionkop out of the wind and in warm sunshine. There was a stiff breeze but nothing compared to most Waterton trips.

Another interesting twist while redoing this trip report in 2019 is realizing that we were looking at Sage and Matkin mountains and towards the Rainy Lakes peaks that I would do with Phil Richards in the fall of 2018.

Once we were satisfied with our views and lunches, we reluctantly headed down Spionkop and started the long traverse over to Avion Ridge.

After coming down from Spionkop Ridge we began the long traverse to Avion Ridge. At first we thought we had to go back over Newman Peak but thankfully we noticed a perfect sheep trail that bypassed any elevation gains on Newman and simply traversed back to the Newman / Avion col without any major dips or doodles. For once I didn’t have to be angry at the sheep who often lay down a perfect trail that goes nowhere near where I want to be!

Avion Ridge is a very straight forward hike. You can either do some easy scrambling and stick to the ridge from the col or you can follow the obvious trail around to climber’s right which bypasses the extra elevation gain but is more boring from a scrambling point of view. Since we already had a long day and were planning another one for the next day we choose to wimp out on the easy bypass route.

The weather held out very nicely and soon we were enjoying more incredible views of cliffs, forests, snow and sparkling lakes from the summit of Avion Ridge. Waterton is a very special place and if you ever get the chance to visit it you will understand it’s pull. You feel like you’re in another world, untouched by time when you’re there.

After some time on the summit we choose to descend back via our ascent route (we briefly considered continuing the traverse of Avion and then descending back down to the Snowshoe trail but this added considerable distance to a long enough day).

The descent was pleasant – at least till the last 4.6 km along the Snowshoe Trail which was a bit miserable. A long day out but a very worthwhile one and one of the nicest days I’ve spent in Waterton.