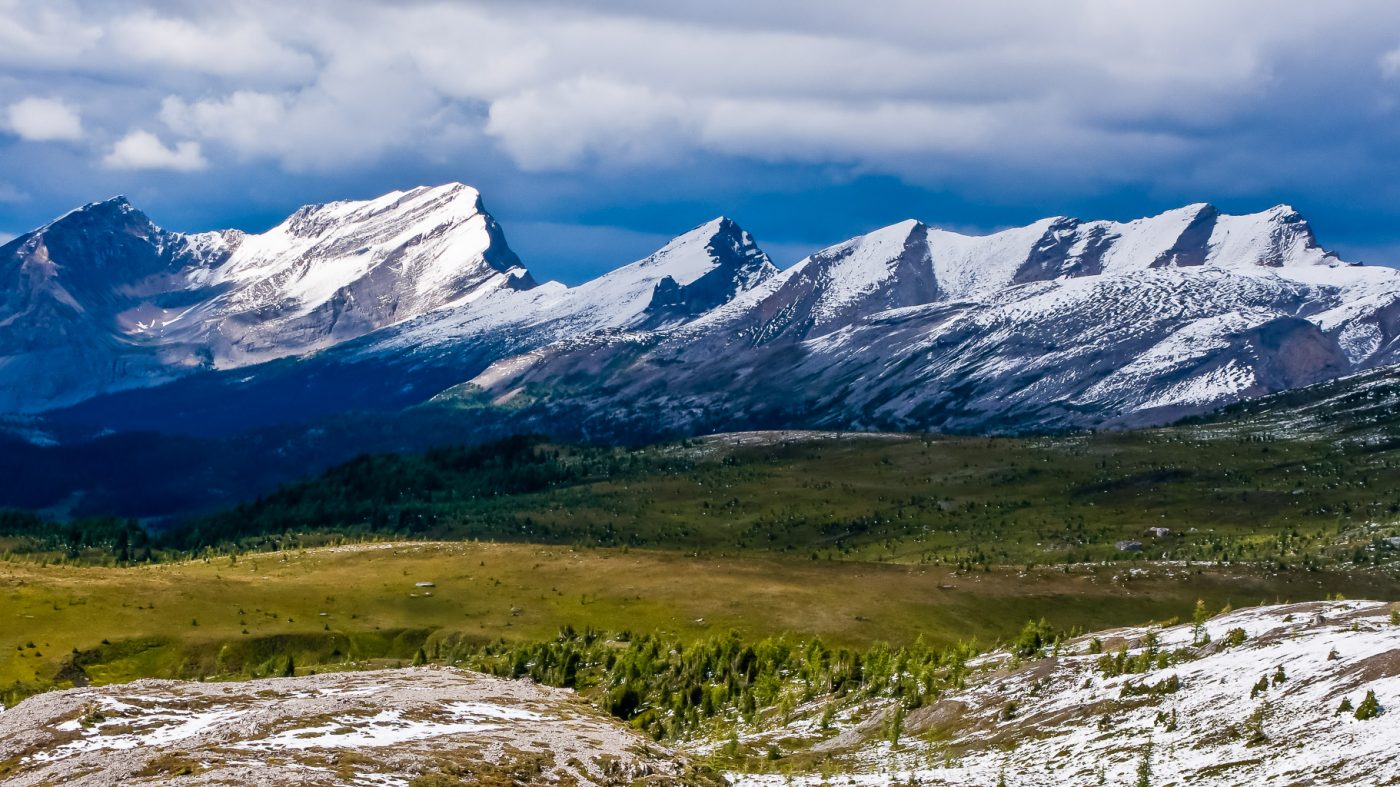 Rod and I set off from the Jones Naiset Cabin around 16:00 on Thursday, September 4th under a mostly cloudy sky. There was very little wind and quite a bit of snow on the surrounding peaks but we were confident we could either scramble up Wonder Peak or The Towers and return before dark. We had already ascended The Nub earlier in the day and still had plenty of energy remaining for another peak. The trail up to Wonder Pass went by quickly and was an easy 200 meters of height gain out of the way.

At the pass we made the decision to go up Wonder Peak because we could spot an obvious trail snaking up it’s lower slopes and The Towers would require a bit more route-finding (basically a side hill bash) before grinding on scree to the top. I would also love to combine Naiset Point with The Towers if I’m going up there anyway and we didn’t have time to do both. Wonder Peak is not rocket science to ascend.

Simply go climbers left at the pass, descend slightly to the north before skirting some small cliffs and getting onto the mountain proper. Once on the mountain, simply follow trails to the summit mass, or stick to the ridge and go around any obstacles on climber’s right. Every time it looks like things are going to be tricky they aren’t. I love this about mountains – usually there’s a way around the difficulties and that’s half the fun of climbing them!

Excellent views to the north towards Nasswald (L) and Og Mountain – which we’d do the next day.

The only moderate bit of scrambling is after you contour around the summit block (on the right) and have to get up the last 15 or 20 meters. I actually missed the first opportunity to go up a small gully and ended up coming back to the peak on a small ridge. There was a cool window in this little section, which was fun to discover. When I got to the last 10 vertical meters of the summit block there was only a small, narrow crack to work my way up. It was great fun with pretty solid holds and didn’t feel as exposed as it actually was.

Rod joined me after only a slight hesitation at the crux. The summit view was great but without clouds it would have been mind-blowing. You could see all the way to the big K-Country peaks like Sir Douglas and Joffre and Eon, Aye and Assiniboine were right in our faces. Marvel Lake and Lake Gloria were glittering far beneath and all around us was a plethora of peaks just begging to be summited! I think this area will keep me busy for a while…

After clicking a bunch of pics we turned back and descended the crack carefully before plunge-stepping easily down the snowy ridge to the foot of the mountain. Once off of Wonder Peak we came on some very fresh and rather large grizzly tracks in the snow. We cautiously yelled and yodeled our way all the way back to the hut. A ranger came by a bit later and confirmed that there were two grizzlies up in the Wonder Pass area, a young, unafraid male and a very large but cautious sow.

If you’re in the Assiniboine area, Wonder Peak is truly wonderful and only took us just over 3 hours round-trip from the Naiset huts. If you have more energy you can do Wonder Peak, Cascade and Gibraltar Rock and Mount Cautley in one loop of moderate scrambling. You can bet I’ll be back to give that a shot sometime!