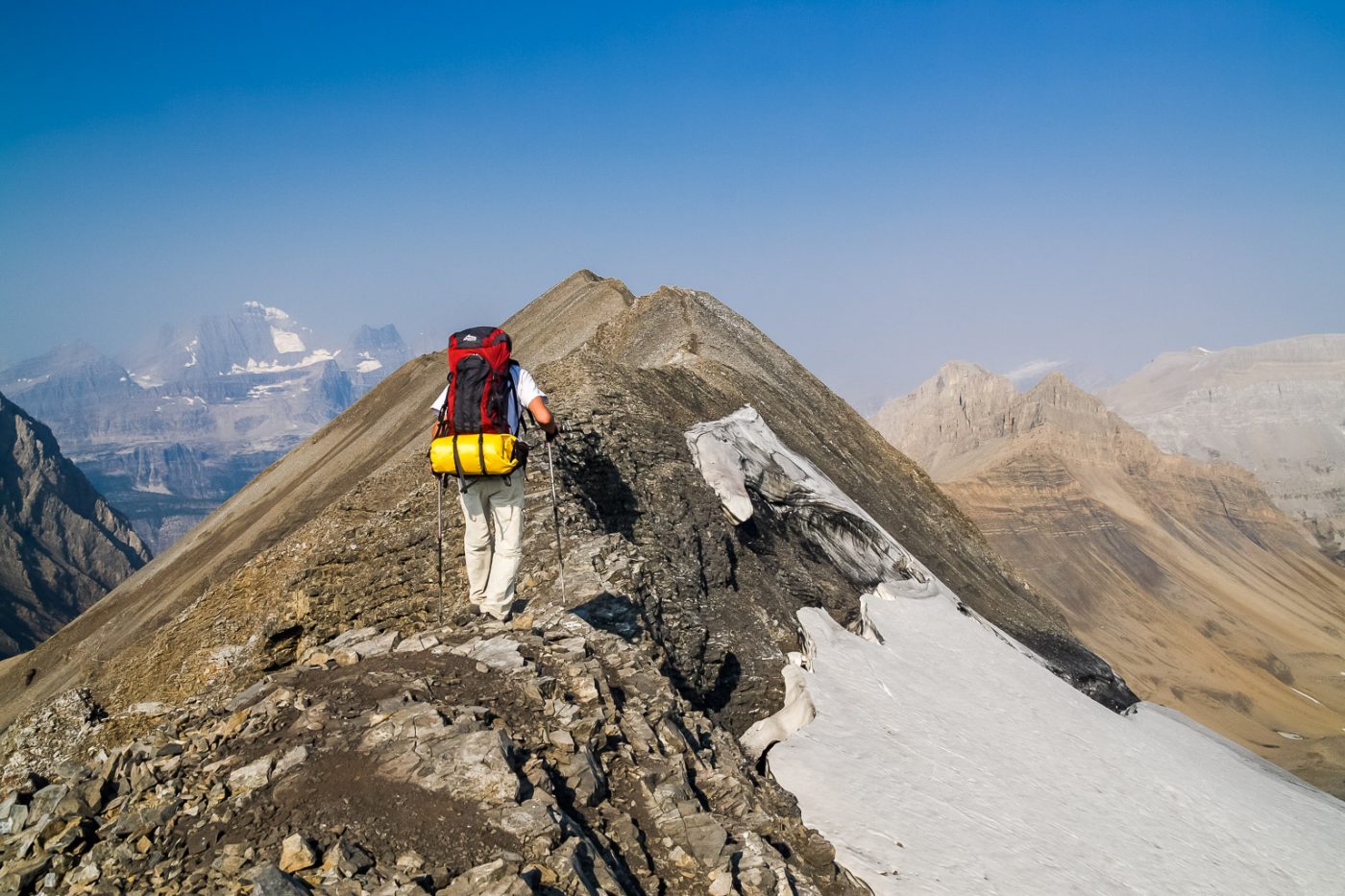 Summit Elevation (m): 2763
Trip Dates: Tuesday, September 5, 2006 to Friday, September 8, 2006
Elevation Gain (m): 1550
Round Trip Time: 1-3 days
Total Trip Distance (km): 36
Quick ‘n Dirty Rating: Class 2/3 – you fall, you sprain or break something
Difficulty Notes: Although this is a backpacking trip, it has some sections of easy to moderate scrambling where a slip or fall could be serious. Since this is a traverse along the Continental Divide, be prepared for everything from calm and sunny to snow and windy – on the same day.
Technical Rating: OT5; YDS (Hiking)
GPS Track: Download
Map: Google Maps

In September of 2006 I was joined by cousin Jon and brother Rod on an unforgettable backpacking trip over Northover Ridge. We weren’t satisfied with just a strenuous 35+ km and vertical mile backpack though – no, we were determined to also bag a number of Kane peaks along the way. Northover Ridge is best done in a clockwise loop starting from the Interlakes Parking lot. We started from the Upper Lakes parking area, but this means an extra (boring) 5 km hike from Interlakes to Upper lakes at the end of the trip which I remember sucking big time. (To be fair, we’d bagged 7 peaks by the time we hit that slog.)

NOTE: As of 2019 I realize that many folks now do this loop as a day trip, which is a great idea as long as you don’t expect to bag the 7 peaks we did along the way on our trip. With light day tripping gear this would make a premier day hike, especially in the fall.

I highly recommend this hike in late August or September when the bush is dying out and Hidden Lake is pretty much a puddle. This will make your approach to Aster Lake much more pleasant and less buggy. Going later in the year also has the advantage of clear skies (unless you’re unlucky with forest fires like we were), cooler weather, more stable weather (no thunderstorms at elevation), less people on the trails and at the campgrounds and no snow / ice on route. Disadvantages of hiking later would be more bear activity in the fall, less daylight hours and some dried up water sources.

We arrived at the Upper Kananaskis Lake parking lot early in the morning on a gorgeous, clear day on September 5 2006. After struggling into our heavy backpacks, we proceeded around the first few kilometers of Upper Kananaskis Lake before cutting off on a ‘hidden’ trail towards Hidden Lake. You may have a tough time finding the trail to hidden lake but look carefully at the maps and the GPS track and you should be able to find it. After following a somewhat rough trail to the lake, we were delighted to see that its shoreline was dried back many meters, allowing for easy passage along it. Even though a trail has been cut around the east shore of Hidden Lake, it’s much easier and more pleasurable to hike alongside it in the open.

From the south end of Hidden Lake we followed bits of trail through light forest and then cairns and trails up a steep scramble through the headwall along Foch Creek and past the impressive Fossil Falls. This section should not be under estimated! With heavy packs on and pebbles-on-slab terrain, it felt exposed in places. I could see some folks turning around here – especially if they don’t have proper hiking boots and poles for stability. 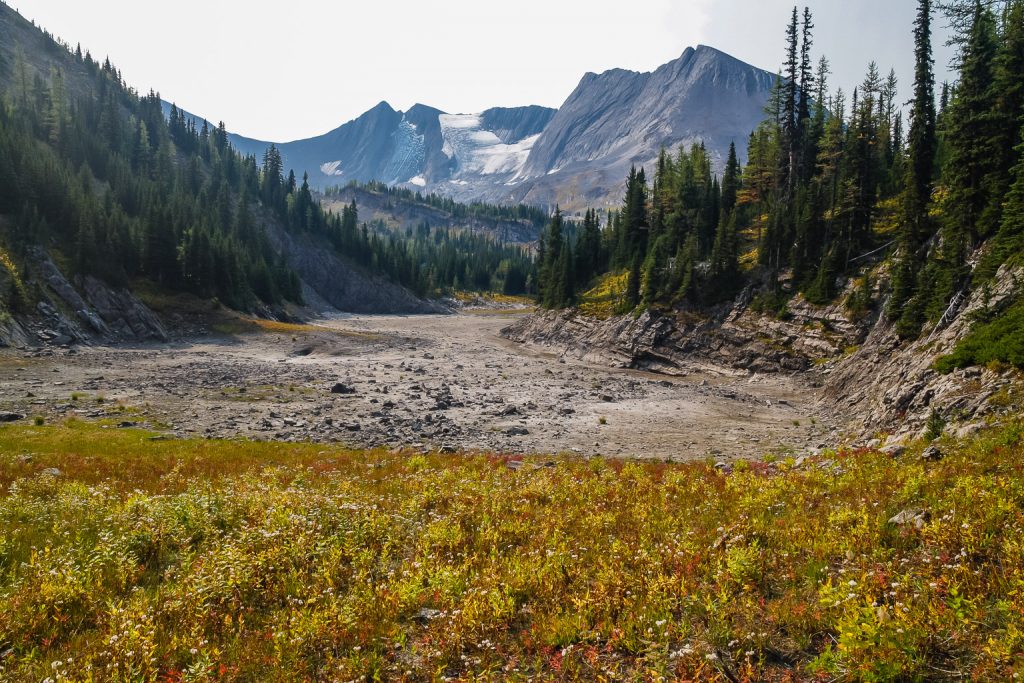 Once we arrived at the base of the Kane scramble route on Mount Sarrail’s west ridge, we dropped our heavy gear and scrambled up Mount Sarrail.

After a wonderful scramble, marred only by the smoky views, we returned to our gear and continued on to the Aster Lake campground (we made reservations before staying here and so should you). The route from the unnamed tarn to Aster Lake can be confusing – I seem to get lost in here every time through it! Remember that you must traverse several ridges / drainages west from the Foch Creek drainage to the Aster Creek drainage. On the map this is clearly marked as a sharp turn right, back along a side creek near Foch towards Aster Creek before turning again left up Aster Creek to Aster Lake.

The camp area was smaller than we were expecting but it also had one of the best out houses around – stunning views of Sarrail if you leave the door open. 🙂 I have to warn you that there are very aggressive porcupines in the Aster Lake camping area so if you hear what sounds like screaming in the middle of the night, or wake up to chewing noises on your boots you know what this is – it’s quite unnerving the first few times it happens.

After spending some time around camp and enjoying a perfectly calm evening we settled in for the night.

The day after our approach to Aster Lake and scramble of Mount Sarrail, we were off to scramble Warrior, Cordonnier and Mount Northover in the Aster Lake area. This was a pretty big day of scrambling and hiking with one of my scariest moments in the mountains occurring while ascending Mount Northover.

We spent a second night at the Aster Lake camp. Bright and early on September 07 we were off to hike more of the route to Three Isle Lake, ascending Worthington and McHarg along the way.

As we made our way along Aster Lake and up the steep pass to the Northover Col I remembered my scary moment on Northover the day before. The views were awesome on this part of the trail so make sure if you do this hike, you have good weather on this section of the route, both for the safety and the views.

On our way up to the pass we spotted a helicopter land near us and drop off a park warden. We briefly chatted with him (he was going down to the warden cabin near Aster Lake) and kept humping our way up to the col. Once at the col we could scope out our descent route on Northover and had amazing views of the rest of the ridge and the surrounding area. The one bummer was forest fire smoke from BC fires that slightly marred our otherwise perfect vistas.

We picked our way along the spine of Northover Ridge in perfect fall weather – warm, windless and cloudless! I can clearly remember the cool morning breezes on our backs as we hiked – what a glorious day that was. We managed to scramble over some pretty narrow areas before dropping down off the ridge (obvious trails) to the drainage leading to Three Isle Lake.

Before getting to the end of this drainage, we dropped our gear once again and this time made for the summits of Mount Worthington and McHarg, which were reached easily.

After enjoying the views from the summits of McHarg and Worthington (as much as we could with the thick smoke anyway) we made our way down their rubble slopes and along the always gorgeous Three Isle Lake to the excellent backcountry campground on its NE corner for our last night.

Jon and I woke up early on September 8 and scrambled up Mount Putnik. Surprisingly we were only the 8th ascent party in the register.

The hike back out to our car along the Three Isle and Forks trails was very scenic but I remember the last 4-5km seemed pretty long. Since the 2013 floods, there may be some trail work going on in this area and some detours or rerouting relative to my GPS track, so beware of that. Descending the chains down the headwall beneath Three Isle Lake was certainly easier with good stairs built into the cliff now – even though long legs are a definite asset here.

This is a fantastic backpacking trip that is unmatched in the Rockies for it’s scenery and type of terrain. Only attempt this if you are comfortable at route finding and exposure with a large pack. I would also highly recommend you pick good weather and clear views, especially for the high traverse of Northover Ridge. Your camera will thank you!