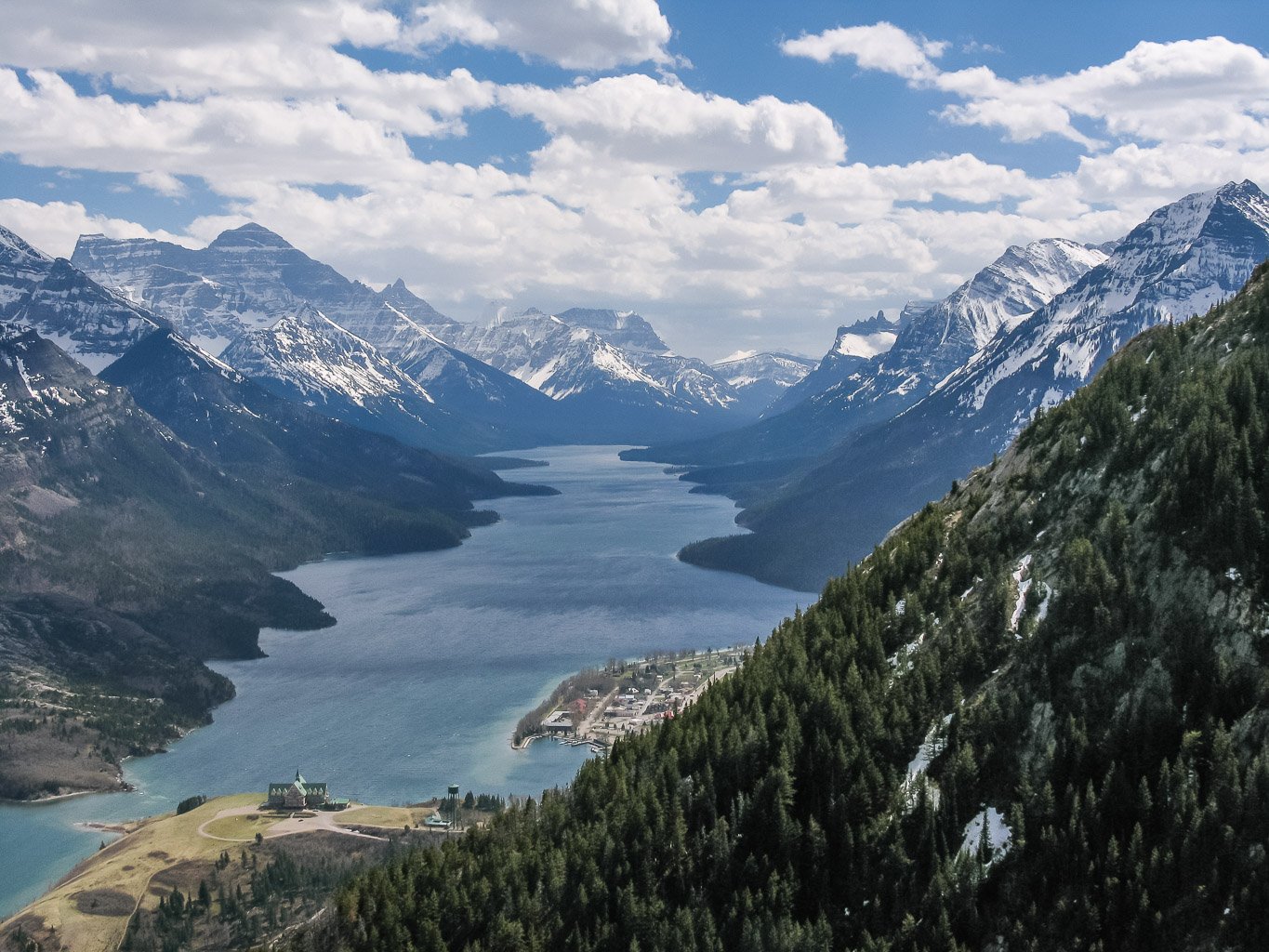 Raf, Jason and I headed down to Waterton National Park on May 06, 2006 to tackle the infamous “Bears Hump” scramble route up Mount Crandell. Jason picked me up at 06:00 and after picking up Raf we were on our way traveling south down highway #2.   We decided to go through the thriving metropolis of Fort Macleod on the way down and were saddened briefly by the sight of a Calgary Flames flag flying at half mast outside of a dilapidated residence. We quickly put those negative thoughts out of the way. I’ve never driven into Waterton from that direction and was immediately impressed by Chief Mountain and it’s majestic profile. It’s now on my list!

Soon we were getting out of the car in the Warden Offices parking lot.   We weren’t sure yet about the route. We could see that Bears Hump looked dry on the ridge but the south side (where we had to traverse) wasn’t visible so we didn’t know how much snow it would hold. Also there was a famous Waterton wind howling at about 40 km/h and we knew that it could be around 100 km/h at the summit or even on the ridge and that would seriously compromise our chances of success on the difficult route.

We putted around the wardens office while debating our route and soon a warden came out for some fresh air and asked us where we were going. We asked about the Bears Hump route and he deftly pointed out that we should not get in any trouble because he was obviously lacking cardio fitness and the only other warden on duty had a bad back so we were “on our own”. We promptly took up the challenge and settled on the most difficult route up Crandell.

We kept the car at the Warden’s Office and walked the short distance up the highway to the tourist information center. On the way none of us realized we were picking up little hitchhikers in the long grass beside the highway. While I made use of the bathroom in the info center, Jason was being told by a park cleaning staff member that we were taking the trail to bears hump a bit too seriously. She obviously thought that with our ice axes, helmets and crampons we were misguided tourists on our way to conquer the mighty bears hump lookout. Jason set her straight about our mountain prowess and we set off up the wheelchair ramp at a good pace.

We got some strange looks from a family in jeans and t-shirts coming down the trail as we struggled up to the lookout but that was the only other humans we saw that day. Up on the lookout we got a better look at the route and a feel for the wind. Neither were that encouraging! Actually the route looked fantastic, if a bit scary, but it was dry. The wind was fierce but not much stronger than in the parking lot which was a good thing.

After a quick break and a bit of a problem for Jason (for more information just imagine you drank too much and your only option for privacy was into a strong wind…) we headed towards the steep terrain stretching up in front of us. The route certainly gets serious after the lookout. We picked our way up the short cliff bands, traversing to the left when we couldn’t find other ways up. At one point we found ourselves traversing quite a ways on the left and growing tired of the scree. Regaining the ridge proved a lot more difficult than you’d think but we did make it up eventually, actually traversing back and up on steep ledges covered with loose scree.

After spending quite a while on the ridge Jason suddenly asked what ticks looked like. The reason he asked was that he happened to notice that I had a little flat-shaped bug crawling up the back of my pants. This is where the true terrors of this route lay. The ticks in Waterton have Lyme Disease and Lyme disease is not cool (do a Google search if you don’t believe me). Of course I had forgotten about these stupid little beasts till right that second. I got chills up my spine as I peeled my pants up to reveal another horror burrowing into my left calf. Sure enough, after peeling up my other pant leg there was another one on my right calf!!

After trying to rid ourselves of the hitchhikers we were faced with another challenge. The Cockscomb. As we approached the precarious ridge of the cockscomb we looked at each other and simply repeated the words of scramblers everywhere, “How bad can it be?”. There wasn’t any snow on the knife edge but to the right there was quite a bit. Hoping that would provide a softer landing if we blew off, we gamely set off over the narrow and extremely exposed edge. This was certainly the upper limit of what you could legitimately call ‘scrambling’ and I haven’t done too many more exposed climbing so far but it was absolutely exhilarating! I would say that this is just as big a test as Smuts. Take Lady MacDonald and add distance, exposure and much steeper down climbing and a narrower ridge and you know what the cockscomb has to offer!

One section almost turned us back because we had to traverse some very steep snow that did not have an encouraging run-out. Jason gingerly kicked steps across that slope and we pressed on. There is one very nasty down climb that will have you wondering how current your will is and just who you left your worldly possessions to again but after that test-of-character you will not encounter anything quite that interesting again. The ridge goes on and on and by the time the terrain got a bit easier we were thrilled and extremely pleased with our route selection. Any other way up this mountain would be inferior to this route – unless you fall off in which case you should have selected another way up.

Once we were done the difficult stuff Jason decided to pop his knee joint out of the socket. Just as we were kidding around about something or another, I heard a very sickening sound of flesh and bone tearing, quickly followed by the much louder sound of Jason screeching like a wounded animal. Which he certainly was! The only good thing about the ordeal was that the knee popped back in and that we were done the most difficult stuff. The bad part was that we still had over 100 vertical meters to get to the summit and we weren’t heading back down our ascent route with Jason’s knee in that condition! Jason popped some Advil and claimed he could make it to the top and he did! I give him a lot of credit for getting not only up to the summit but all the way back down in a lot of pain and only hope that he didn’t damage anything permanently.

After snapping 1000 pictures at the summit (curiously the wind was still no stronger than in the parking lot) we headed down the alternate descent route. The descent was nothing too exciting. The warden suggested we stay high on the ridge and then drop down to the warden station so naturally we ignored his advice and side-sloped it instead!

There was lots of soft scree which helped Jason’s knee and eventually we dropped down over the promontory (which is a lot smaller than you’d expect) and bushwhacked our way out of the raging creek and off the mountain.

I highly recommend this scramble and the Bears Hump route in particular – along with the cockscomb variation. Wait for good weather and go for it! Just make sure you’ve already done Lady MacDonald so you know what I’m talking about in my description and you shouldn’t be in for too big of a shock. Just remember to keep safe out there and update that will.