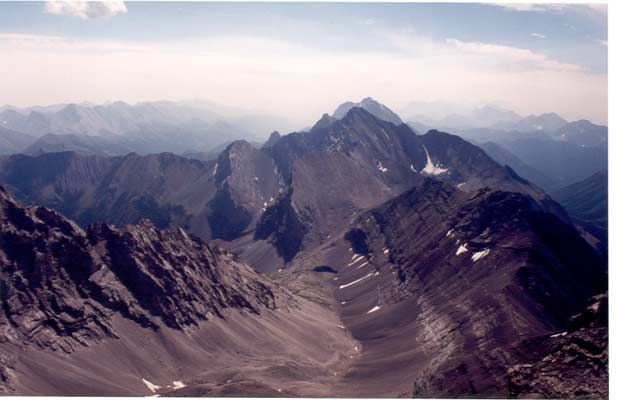 Sean and I left Calgary around 8am for a late start up Mt. Rae on a sunny July Saturday morning. Originally we were going to scramble Mt. Chester but since that entailed a very dusty ride down the Spray Lakes road and I had just hand-washed the beast I decided to use a shallow excuse to climb a mountain that has piqued my interest for a while already.

The beast very nearly didn’t make it up to the Highwood Pass but eventually we did crest the pass at 7,200 feet (higher than Mt. Baldy) and parked at the Highwood Meadows parking lot. There were a bunch of cars already parked there but we struck off up the trail and quickly gained elevation to Ptarmigan Cirque. The cirque is a beautiful area of stunted trees and tons of wild flowers. We saw evidence of grizzly diggings on the way up to the cirque and I would think that if I was a bear this would be the place to go.

We worked our way up behind the cirque up a very steep scree slope to the col between Mt. Rae and an unnamed peak. If you haven’t done this scramble do not under-estimate this scree slope! It is very steep and very loose. I really wished I was wearing a helmet when I was both ascending and descending this slope. On the way up we worked our way up the right side of the slope where the terrain became more slabby although steeper as well. There were two other scramblers below us and although we tried very hard to avoid kicking rocks down on them I don’t think we succeeded 100%.

After topping out at the col I felt pretty weak-kneed but considering we had only left the parking lot just over an hour earlier it wasn’t a big shock that I was a little out of breath! Sean came up over the col behind me and we proceeded slowly towards the summit. On hindsight we should have gained the ridge a lot sooner than we did. I had to struggle up a very loose chimney to gain the summit ridge and Sean didn’t fare to much better.

Once at the top I felt that this was one of the best scrambles I’ve done. It was hard but very rewarding. The height and the clear skies allowed us a great panorama and we actually spent 1.5 hours just soaking up the rays and chatting with the two scramblers, a father and son team, who came up behind us. Even though we left Calgary fairly late we were the second party to summit which kind of surprised me.